skip to main | skip to sidebar

Dakota fire holes are easy to build/dig, burn cleanly and clean up well. For more on these one can see: https://en.wikipedia.org/wiki/Fire_pit#Dakota_fire_pit
Here I attempt to extend one to resemble a TLUD biochar stove. TLUD stands for Top Lit Up Draft, and is an arrangement of chambers and air flows that forms charcoal while cleanly burning the smoke produced. For more on these one can see: https://en.wikipedia.org/wiki/Top-lit_updraft_gasifier
I dug a Dakota fire hole, then dug below one of the holes to form a char-making chamber. 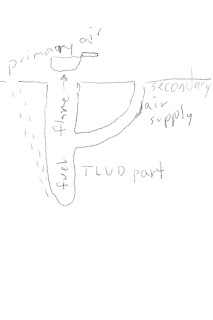 It differed from this drawing in that there was no primary air supply. I guess it is actually not a TLUD, but a 'TLND' (Top Lit No Draft). Then I loaded the chamber with dry wood, spread kindling and tinder above, but still way below ground level. Then I lit a fire atop the fuel. It burnt pretty cleanly, but released a little smoke. I'd like to improve this and will try to figure out how. Below are some photos of the resulting char in the hole. To enlarge a photo fragment below, to see the entire image, click on each fragment. 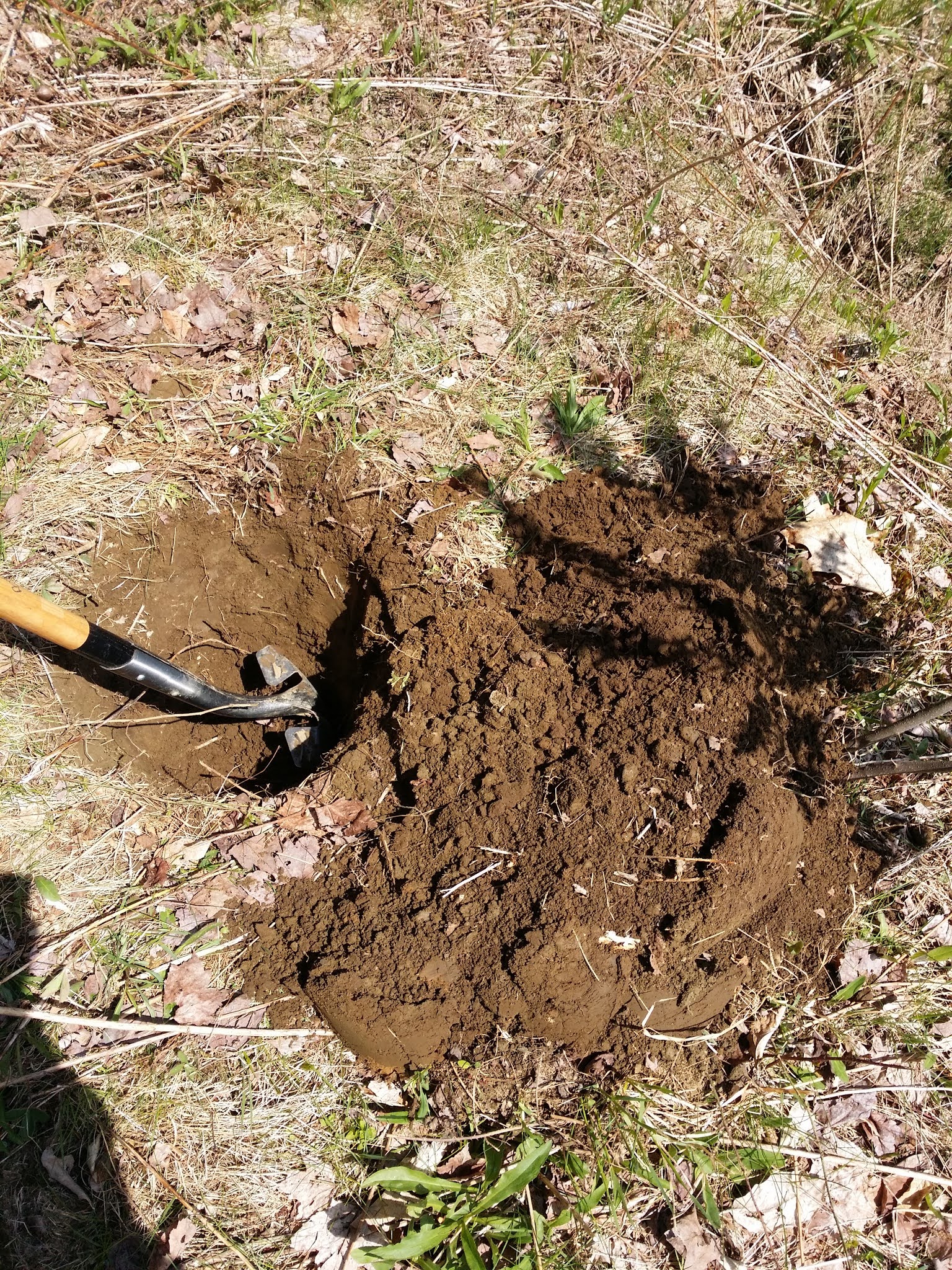 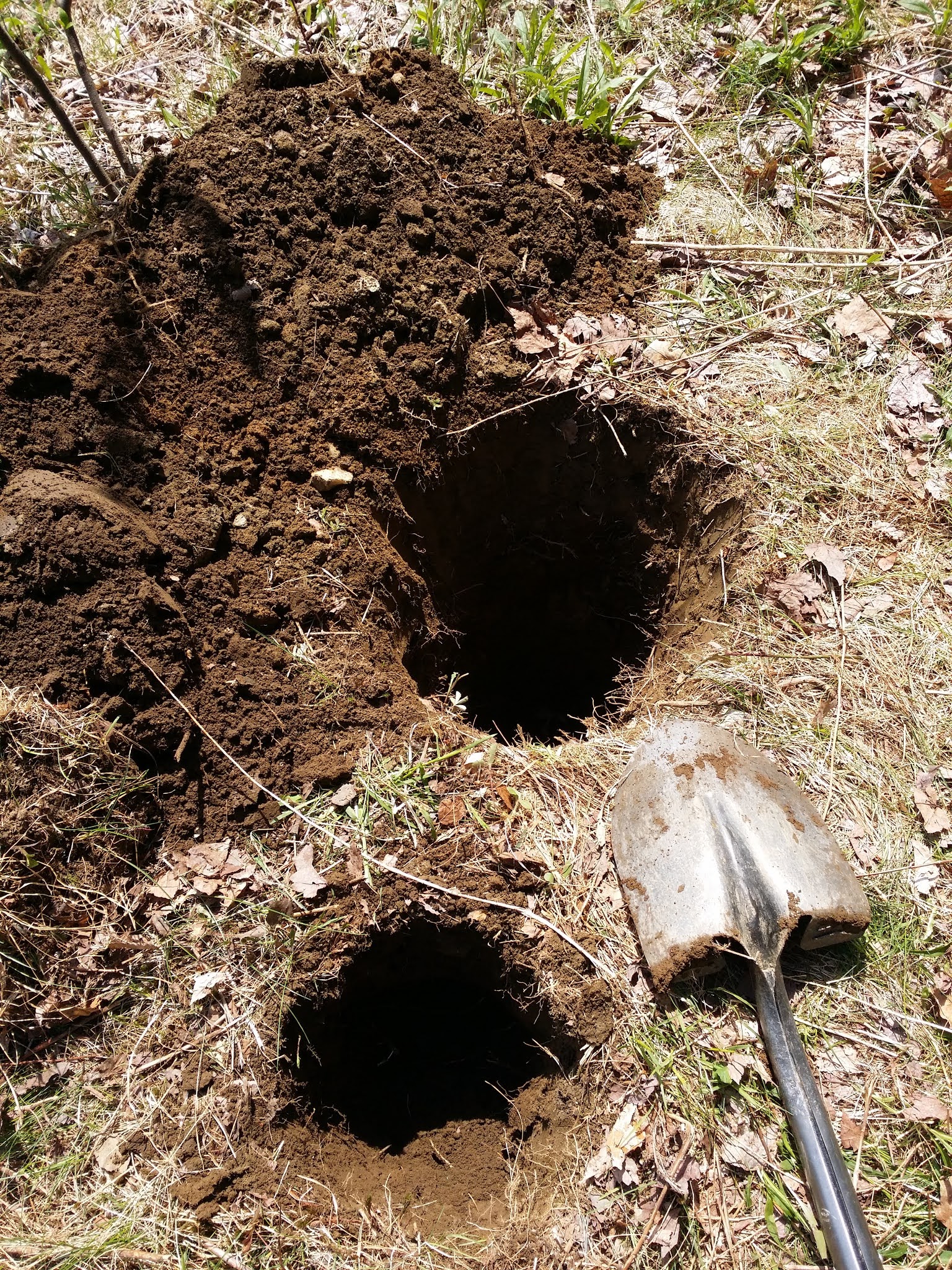 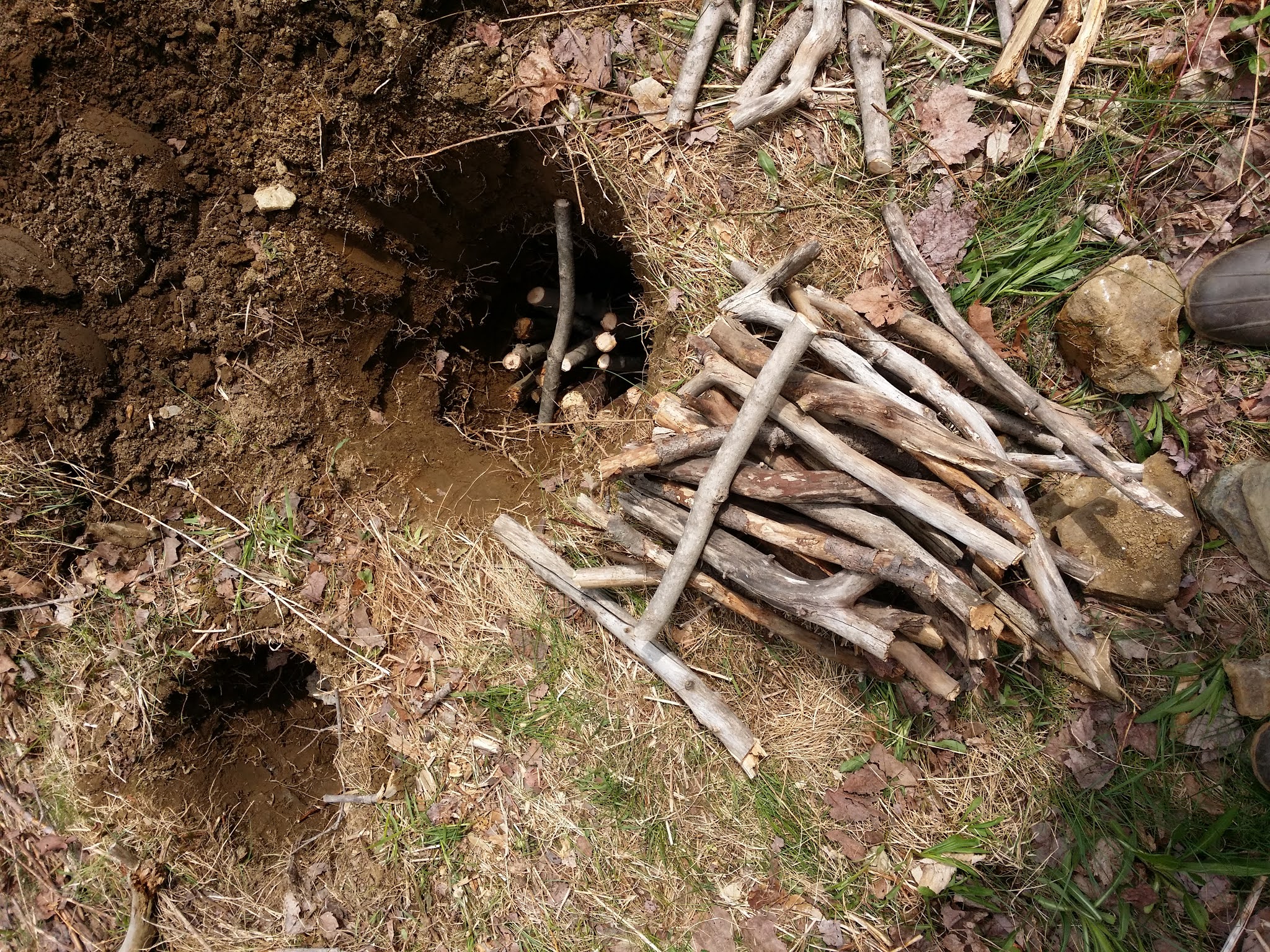 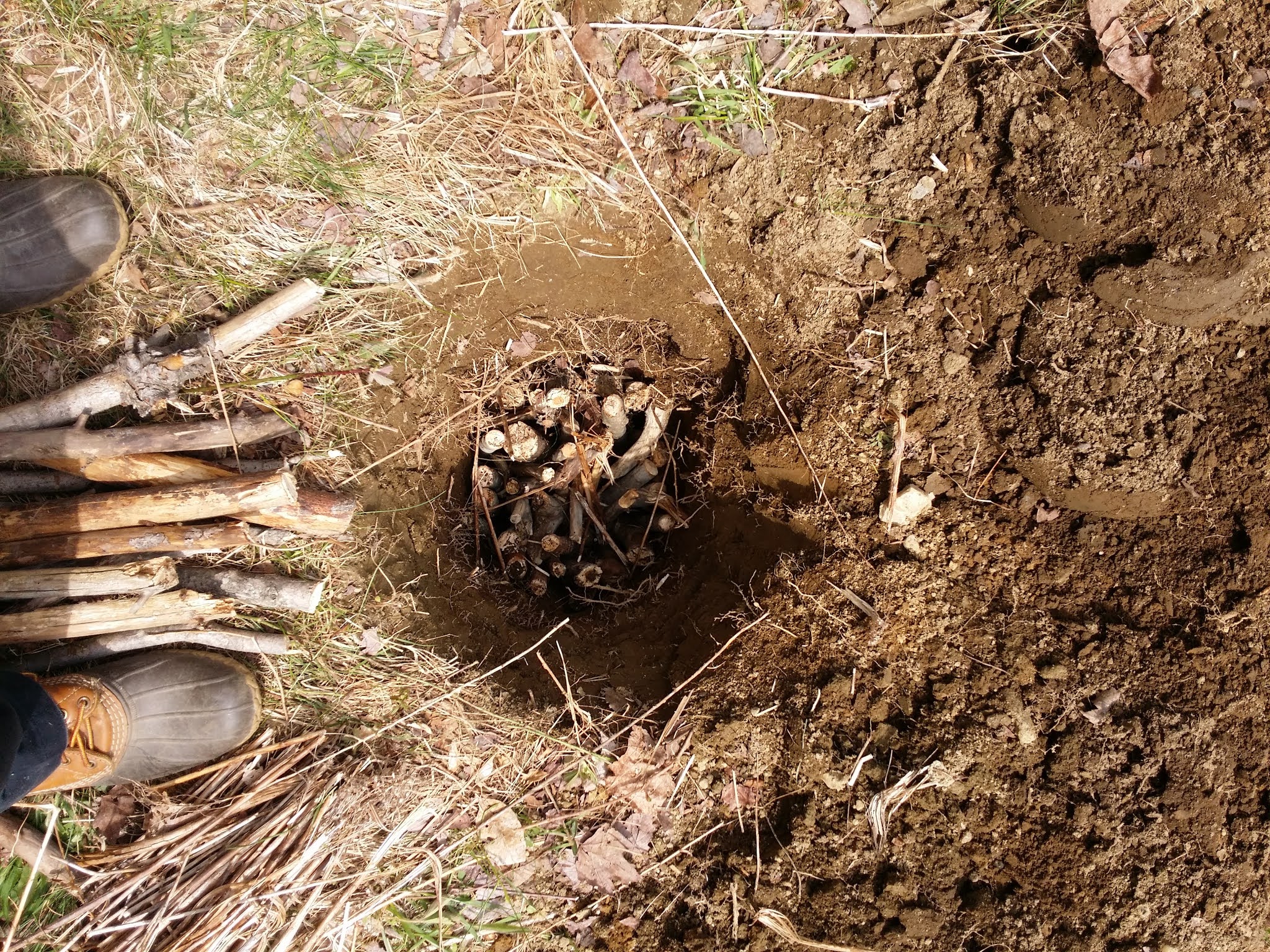 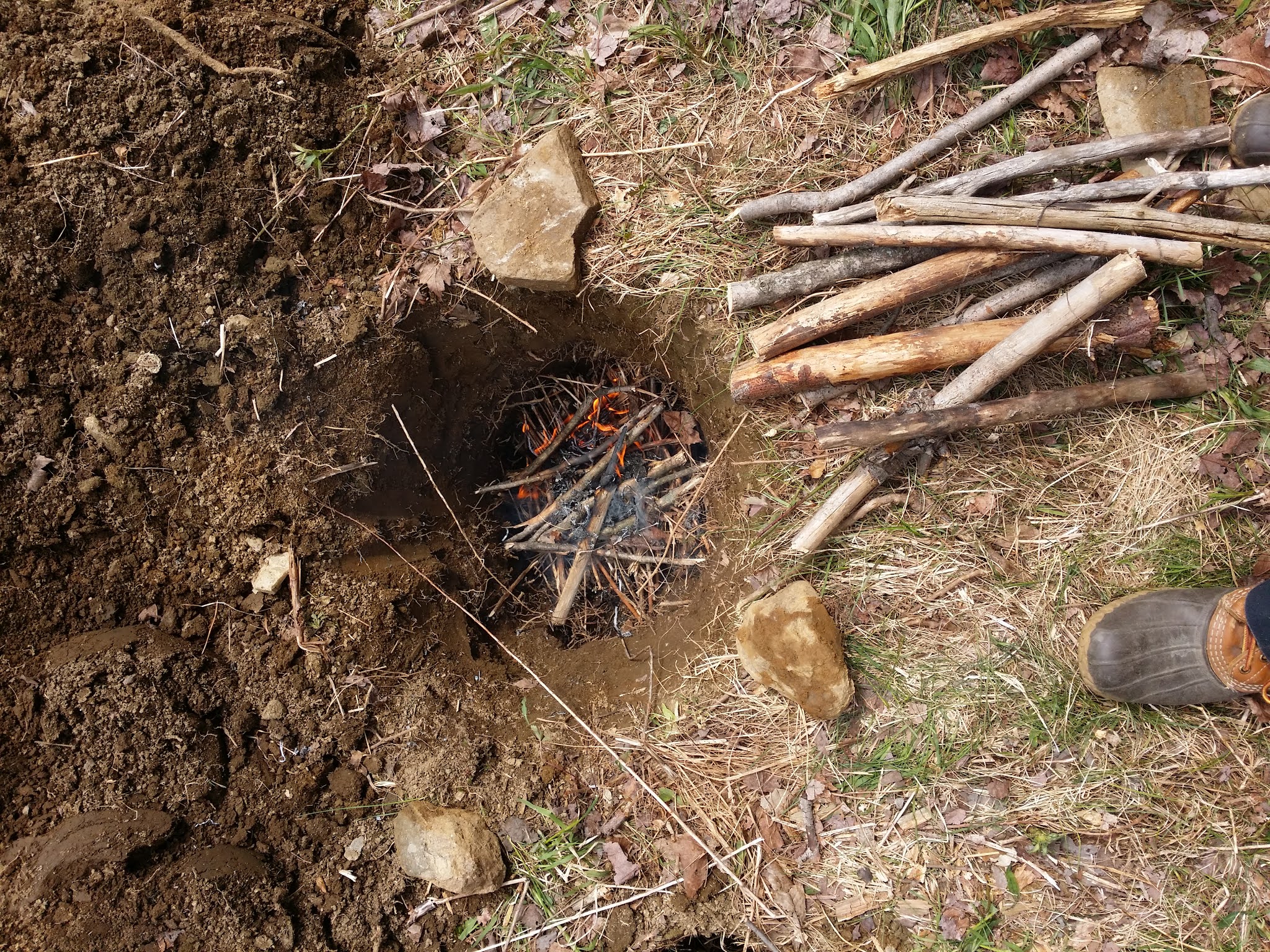 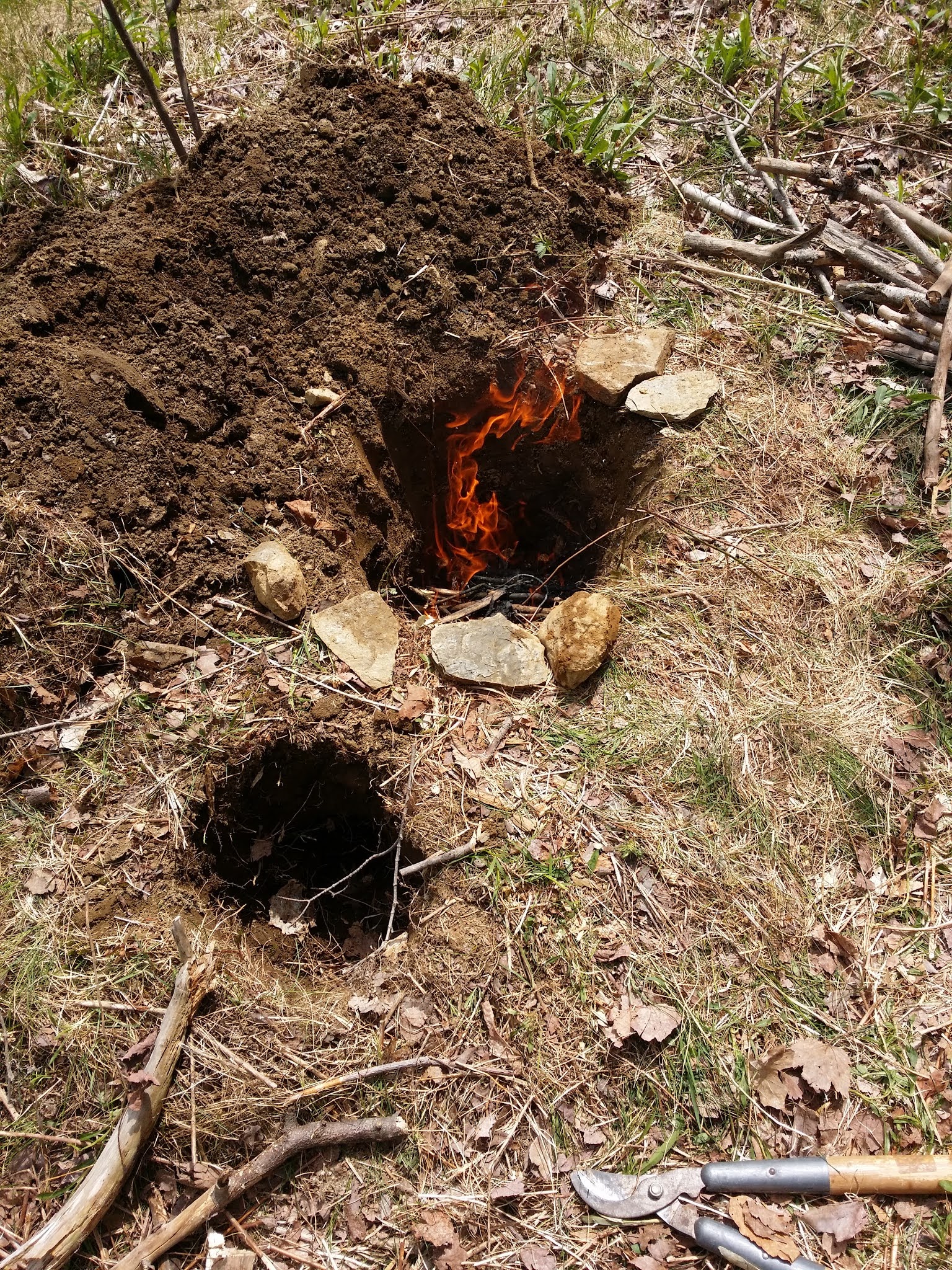 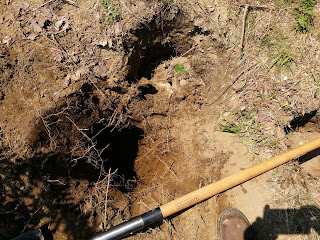 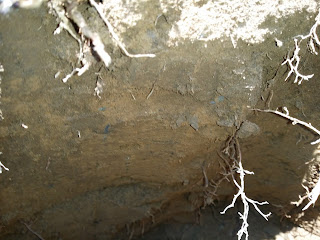 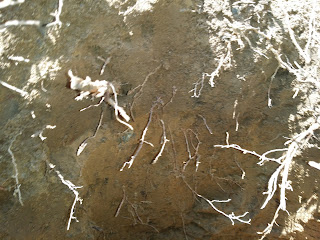 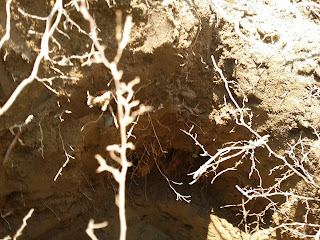 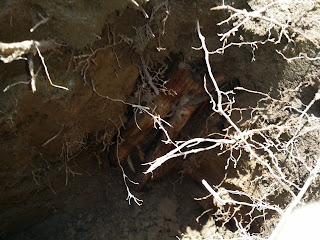 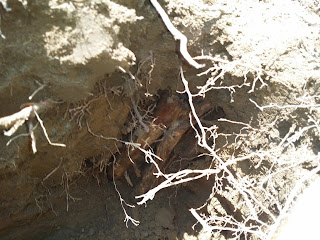 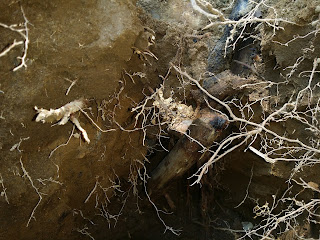 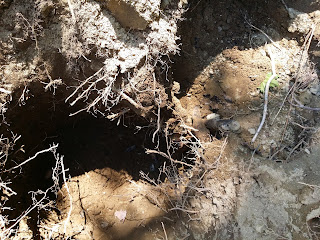 Posted by Brian Cady at 4:55 AM No comments:

Downhill for All Involved

Downhill for All Involved

“Recent research from Cambridge University…warns that if climate change is left unchecked, catastrophic losses on property investments from disasters like wildfires, hurricanes, and flooding will triple over the next 30 years… the resulting losses to the insurance industry could cause a global financial crisis.”(2 Forbes 2019-5-22)

Can we protect our global economy by fixing our damaged climate? Who has means and motive? Are there lessons within history?

HISTORY: In the 1750s, Benjamin Franklin and others founded a house fire insurer in Philadelphia, which raised rates on more hazardous homes, and refused to insure the riskiest.(3) In 1777, Anthony Hill swept Philadelphia chimneys for this ‘Philadelphia Contributorship’.(4) This chimney sweeping exemplifies a significant step, by fledgling American insurers, beyond merely avoiding or pooling risk, to risk reduction.

In 1893, William H. Merrill midwifed the safety-troubled electrical industry into the behemoth we know today, after the young engineer started working for insurance underwriters. They hired him to inspect electrical set-ups at the Chicago World’s Fair grounds for the Fair’s opening. Merrill, just graduated from Massachusetts Institute of Technology (MIT), proposed Underwriters Laboratories (UL) to test and certify fire safety for the insurance underwriting industry. Rejected at first, he later succeeded in convincing underwriters to start this.(5)

So ended an era of deadly, catastrophic fires that scarred USA’s young cities. For example, The Great Chicago Fire of 1871 killed about 275 people and caused $222 million dollars of damage, equivalent to $4.6 billion 2018 dollars.(6) It accompanied three other fires that week, in Peshtigo, MI, Port Huron, MI, and Urbana, IL which killed more than 2,200.(7) Today we again suffer the devastating effects of fire - not from burning houses, but from burning fossil fuels. The resulting carbon dioxide ruins the climate that our food system depends on, and for which our buildings were designed.

The Drawdown Review of 2020 forecasts the cost and benefits of climate preservation in two scenarios.(11) The first scenario forecasts $22.5 trillion in initial investments stopping 994 gigatons of CO2 or equivalent greenhouse gas emissions, with lifetime costs running to -$95.1 trillion and lifetime profits of $15.6 trillion. Note: Lifetime costs are negative – beyond just the direct profit to investors, more than four times the investment value would be returned to society. These reviews describe how it could be cheaper to fix rather than suffer a ruined climate; indeed, so much cheaper that, in the Drawdown analysis, it’s actually profitable.

With about $27 trillion dollars in assets,(12) do the world’s underwriters and insurers have the means to control the climate crisis? If four decades of climate crisis containment were invested in at once, at a cost of $69.6 trillion, according to the Stern Review, underwriters and insurers would need to borrow $42.6 trillion, but stand to gain from the $174 trillion in climate damage costs avoided over those forty years. And the insurance industry now has enough for the Drawdown’s first scenario’s investments.

How might this occur? A global underwriter consortium might set standards that would identify carbon-neutral or -negative provision of goods or services. Policies might then specify that to receive insurance, underwriter’s insurers and customers must only use carbon-neutral or -negative goods and services that meet that standard; while also specifying direct investment into climate protection, and out of climate destruction, by underwriters, insurers and customers. This first part mimics Underwriters Laboratories’ success, the second could adhere to Stern and Drawdown Reviews’ prescriptions.

Posted by Brian Cady at 5:40 AM No comments:

"At one period in my life, I believed passionately in...egaltarian ideals, and lived for longer than was sensible on communes in the United States and Europe, farming unproductive steeply sloping fields locked away in the mountains unwanted by their original owner. The experience offered a salutory lesson in understanding how ownership of the earth shapes the way society is organized. The most attractive qualities of a primitive commune, sharing the labor and the rewards, turned out to be its most destructive. It was not the group, but the individual who actually plowed the field, dug the ditch, milked the goats, and made the granola. Over time, it became obvious that some performed these tasks better, or more slowly, or more lazily, than others, and so the tasks either had to be organized with rigid efficiency to spread the burden fairly, or... dissensions... boiled up and tore the community apart.... Far from being able to dispense with government, equal ownership entailed a surprising intensity of organization and policing of personal foibles." Andro Linklater, 2014, Owning the Earth: the Transforming History of Landownership. London, Verso.
Posted by Brian Cady at 12:40 PM No comments:

Ends and Means: A Practical Dualism

From Uneconomic Growth to a Steady-State Economy by Herman E Daly
My rating: 5 of 5 stars

Lucid, timely, wise and important; the writings of this book clearly embody much great thought, and I find they inspire much additional thought.

View all my reviews

Posted by Brian Cady at 4:28 AM No comments:

Why our Earth is unlike Venus, and comparing two ways to keep it this way.

The surface temperature of Venus melts lead, while Earth’s supports life, and water. While Earth is farther from the sun, this explains only part of the temperature difference. (1) The greenhouse effect and the different amounts of greenhouse gases in their atmospheres explains most of the surface temperature difference between Earth and Venus and explains why Venus is on average hotter than Mercury even though Mercury is closer to the sun.
Earth avoided Venus’s fate, so far, despite starting with similar amounts of carbon (2) , by reacting carbon dioxide (CO2) with mafic rock. (3) Mafic rocks are rich in magnesium and iron, and underlie most of our ocean floors, and form Earth’s mantle, but are rarer atop continents. Most of Earth’s CO2 has reacted with such rocks already, yielding the carbonate rocks that store most carbon on Earth. (4)
We increasingly have too much CO2 in our air and oceans now to keep the climate we rely on for our food. (5) The recent increase in air’s CO2 got here by our burning fuels for energy. (6) ‘Unburning’ these fuels would require energy we now don’t have, since we used it already. (7) But the reaction between these mafic rocks and CO2 is energetically favorable. (8) It occurs spontaneously whenever water, mafic rock and CO2 come together, requiring no further energy. So to react these rocks with this CO2, we need to bring them together.
Should we bring the CO2 to the rock, or the rock to the CO2? Reasonable proposals differ on this. For example, let’s compare two carbon dioxide reduction (CDR) approaches: Olaf Schuiling’s Enhanced Weathering (EW) of olivine, a mafic rock, compared to a combination of David Keith and others’ Direct Air Capture (DAC), linked to Juerg Matter and others’ Injection(I) of CO2 into basalt rock, permanently forming carbonate rock. We’ll term the joint DAC and I process (DACI).
Schuiling proposes bringing the rock to the CO2. Grinding the mafic olivine rock speeds the reaction between them. In part he suggests ground olivine substitute for limestone in agricultural use, because, while both will reduce soil acidity, olivine will also eventually bind with CO2 as carbonate rock at the ocean’s bottom, after CO2 in rainwater, as carbonic acid, dissolves that olivine.
Bringing the CO2 to the rock, DAC’s CO2 would be injected in basalt. In DACI, first, Keith and others’ two-part process extracts CO2 from air. Then Matter and others’ injection (9) would combine this CO2 with Icelandic basalt permanently as carbonate rock.
It is not fair to assume that this DACI combination would be a commercially viable process, as this combined process is neither a stated goal of DAC nor of basalt injection. But without attaching CO2 basalt injection to DAC, comparing it to EW would also be unfair, as EW sequesters CO2 permanently as rock, while DAC without injection merely isolates it in labile gaseous form, liable to leak out and renew troubles, and basalt injection assumes a stream of gaseous CO2, unlike EW’s starting point of CO2 dissolved in air. Thus we will compare DACI and EW processes with similar initial conditions and results: from CO2 in air to CO2 in rock.
But how best compare these? Straight-forward economic analysis, while tractable, ignores non-monetized costs; like pollution’s effect on health, and reliance on non-renewable resources; and mis-monetized costs; like USA’s vast oil exploration subsidies. How should we evaluate and contrast these two distinct CDR approaches? We need a method to weigh different proposals’ costs and benefits to Earth, not to the individual human actors performing CDR.
One cost measure is the amount of sunlight energy used up in every step needed and sufficient for each proposal, and a measure of benefit is the amount of sunlight energy acquired or saved by the proposal. Developed and used in the fields of environmental accounting and ecological engineering to rate multiple proposals, this approach compared differing methods, with varying environmental impacts, which addressed the same situation. (10)
Let’s approach these two CDR proposals with this environmental accounting method to guide us.
-
1. “ The CO2-rich atmosphere [of Venus] generates the strongest greenhouse effect in the Solar System, creating surface temperatures of at least 735 K (462 °C; 864 °F) . [12 ] [58 ] This makes Venus's surface hotter than Mercury 's, which has a minimum surface temperature of 53 K (−220 °C; −364 °F) and maximum surface temperature of 693 K (420 °C; 788 °F) , [59 ] even though Venus is nearly twice Mercury's distance from the Sun and thus receives only 25 % of Mercury's solar irradianc e .” Wikipedia Venus entry, 2018-June 20th .
2. http://www.pnas.org/content/pnas/77/12/6973.full.pd f
3. Earth’s carbonate rock contains about 60 million gigatons carbon, while dissolved in the oceans as carbon dioxide is 38,400 gigatons carbon, with air containing 720 gigatons carbon. https://en.wikipedia.org/wiki/Carbon_cycle, citing doi:10.1126/science.290.5490.291
4. Same as footnote #3 .
5. https://en.wikipedia.org/wiki/Greenhouse_effect .
6. https://en.wikipedia.org/wiki/Greenhouse_effect .
7. No energy conversion is perfectly efficient, and we already used up the energy we got from burning the fuels. Thus reversal of fuel oxidation requires more energy than was first liberated .
8. https://www.sciencedaily.com/releases/2018/06/180605103437.htm
9. http://science.sciencemag.org/content/352/6291/1312
10. Table 12.1 Evaluation of Alternatives for Pulp Paper Wastes in North Florida, OdumHT 2007 Environment, Power and Society For the Twenty-First Century :359.
Posted by Brian Cady at 2:06 PM 1 comment: