skip to main | skip to sidebar

From Uneconomic Growth to a Steady-State Economy by Herman E Daly
My rating: 5 of 5 stars

Lucid, timely, wise and important; the writings of this book clearly embody much great thought, and I find they inspire much additional thought.

View all my reviews
Posted by Brian Cady at 4:28 AM No comments:

May We Be YOUR Party? 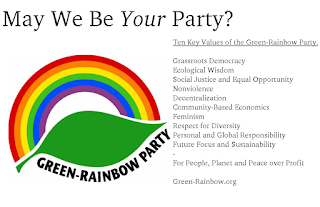 Posted by Brian Cady at 8:44 AM No comments:

Jack Beatty and the Greens

Why our Earth is unlike Venus, and comparing two ways to keep it this way.

The surface temperature of Venus melts lead, while Earth’s supports life, and water. While Earth is farther from the sun, this explains only part of the temperature difference. (1) The greenhouse effect and the different amounts of greenhouse gases in their atmospheres explains most of the surface temperature difference between Earth and Venus and explains why Venus is on average hotter than Mercury even though Mercury is closer to the sun.
Earth avoided Venus’s fate, so far, despite starting with similar amounts of carbon (2) , by reacting carbon dioxide (CO2) with mafic rock. (3) Mafic rocks are rich in magnesium and iron, and underlie most of our ocean floors, and form Earth’s mantle, but are rarer atop continents. Most of Earth’s CO2 has reacted with such rocks already, yielding the carbonate rocks that store most carbon on Earth. (4)
We increasingly have too much CO2 in our air and oceans now to keep the climate we rely on for our food. (5) The recent increase in air’s CO2 got here by our burning fuels for energy. (6) ‘Unburning’ these fuels would require energy we now don’t have, since we used it already. (7) But the reaction between these mafic rocks and CO2 is energetically favorable. (8) It occurs spontaneously whenever water, mafic rock and CO2 come together, requiring no further energy. So to react these rocks with this CO2, we need to bring them together.
Should we bring the CO2 to the rock, or the rock to the CO2? Reasonable proposals differ on this. For example, let’s compare two carbon dioxide reduction (CDR) approaches: Olaf Schuiling’s Enhanced Weathering (EW) of olivine, a mafic rock, compared to a combination of David Keith and others’ Direct Air Capture (DAC), linked to Juerg Matter and others’ Injection(I) of CO2 into basalt rock, permanently forming carbonate rock. We’ll term the joint DAC and I process (DACI).
Schuiling proposes bringing the rock to the CO2. Grinding the mafic olivine rock speeds the reaction between them. In part he suggests ground olivine substitute for limestone in agricultural use, because, while both will reduce soil acidity, olivine will also eventually bind with CO2 as carbonate rock at the ocean’s bottom, after CO2 in rainwater, as carbonic acid, dissolves that olivine.
Bringing the CO2 to the rock, DAC’s CO2 would be injected in basalt. In DACI, first, Keith and others’ two-part process extracts CO2 from air. Then Matter and others’ injection (9) would combine this CO2 with Icelandic basalt permanently as carbonate rock.
It is not fair to assume that this DACI combination would be a commercially viable process, as this combined process is neither a stated goal of DAC nor of basalt injection. But without attaching CO2 basalt injection to DAC, comparing it to EW would also be unfair, as EW sequesters CO2 permanently as rock, while DAC without injection merely isolates it in labile gaseous form, liable to leak out and renew troubles, and basalt injection assumes a stream of gaseous CO2, unlike EW’s starting point of CO2 dissolved in air. Thus we will compare DACI and EW processes with similar initial conditions and results: from CO2 in air to CO2 in rock.
But how best compare these? Straight-forward economic analysis, while tractable, ignores non-monetized costs; like pollution’s effect on health, and reliance on non-renewable resources; and mis-monetized costs; like USA’s vast oil exploration subsidies. How should we evaluate and contrast these two distinct CDR approaches? We need a method to weigh different proposals’ costs and benefits to Earth, not to the individual human actors performing CDR.
One cost measure is the amount of sunlight energy used up in every step needed and sufficient for each proposal, and a measure of benefit is the amount of sunlight energy acquired or saved by the proposal. Developed and used in the fields of environmental accounting and ecological engineering to rate multiple proposals, this approach compared differing methods, with varying environmental impacts, which addressed the same situation. (10)
Let’s approach these two CDR proposals with this environmental accounting method to guide us.
-
1. “ The CO2-rich atmosphere [of Venus] generates the strongest greenhouse effect in the Solar System, creating surface temperatures of at least 735 K (462 °C; 864 °F) . [12 ] [58 ] This makes Venus's surface hotter than Mercury 's, which has a minimum surface temperature of 53 K (−220 °C; −364 °F) and maximum surface temperature of 693 K (420 °C; 788 °F) , [59 ] even though Venus is nearly twice Mercury's distance from the Sun and thus receives only 25 % of Mercury's solar irradianc e .” Wikipedia Venus entry, 2018-June 20th .
2. http://www.pnas.org/content/pnas/77/12/6973.full.pd f
3. Earth’s carbonate rock contains about 60 million gigatons carbon, while dissolved in the oceans as carbon dioxide is 38,400 gigatons carbon, with air containing 720 gigatons carbon. https://en.wikipedia.org/wiki/Carbon_cycle, citing doi:10.1126/science.290.5490.291
4. Same as footnote #3 .
5. https://en.wikipedia.org/wiki/Greenhouse_effect .
6. https://en.wikipedia.org/wiki/Greenhouse_effect .
7. No energy conversion is perfectly efficient, and we already used up the energy we got from burning the fuels. Thus reversal of fuel oxidation requires more energy than was first liberated .
8. https://www.sciencedaily.com/releases/2018/06/180605103437.htm
9. http://science.sciencemag.org/content/352/6291/1312
10. Table 12.1 Evaluation of Alternatives for Pulp Paper Wastes in North Florida, OdumHT 2007 Environment, Power and Society For the Twenty-First Century :359.
Posted by Brian Cady at 2:06 PM No comments:

Some investors consider more than their own financial returns, considering investment’s environmental sustainability and social responsibility, as well as corporate governance. Each of such ‘ESG’ investing strategies have now been shown to actually enhance returns: https://www.db.com/newsroom_news/2016/ghp/esg-and-financial-performance-aggregated-evidence-from-more-than-200-empirical-studies-en-11363.htm
Furthermore, the risk of total loss of capital in ESG investing has been shown to be quite comparable to money otherwise invested: https://insight.factset.com/the-hidden-risks-of-csr-esg-and-sri-investing.
Posted by Brian Cady at 11:00 AM No comments:

Our  physical economy can’t grow forever on our finite earth. Despite those feeling a healthy economy must always grow, nothing healthy grows forever - such cancerous growth wouldn’t fit on this planet. Common sense heeds calls for healthy economic maturity, yet many economists fail to understand.

What’s wrong with economic growth forever? The problems with this fiction are many:
1) It won’t fit. Our earth, having a definite size, can sustain a limited physical economy. More industry than this degrades the environment upon which that industry relies. Others argue that economic growth need not accompany physical growth, but isn’t that merely inflation? Stagflation, where inflation accompanies no growth, shows that these two are separable, but stagflation isn’t economic health. Eventually sanity calls for economic health without physical growth. But when should we begin to consider what amount of economic activity is mature? Perhaps, as air’s carbon pollution exceeds limits of climatic stability, upon which our food supply depends, now is not too early.

How Do We Realize Economic Maturity?

In one meaning of ‘realize’; to understand and acknowledge, we might realize economic maturity (in the sense of physical maturity), when we see that it has grown to it’s ultimate desirable size.

In another meaning of ‘realize’; to achieve, we might realize economic maturity (maturity in the sense of full ethical development) by seeing beyond preoccupation with growth; with economic ‘bigness’ to better, more ethical measures, based on qualities, not quantities.

How to better equality without overgrowth has been explored by prominent ecological economists Herman Daly http://www.steadystate.org/eight-fallacies-about-growth/, Joshua Farley, Hazel Henderson and in recent work by Tim Jackson. Let’s apply this wisdom to understanding how we can better our real fate.
Posted by Brian Cady at 7:50 AM No comments:

Robocalypse: What’s not to like about the elimination of  all human labor with robots? Isn’t it good to eliminate labor with productivity?

In the pre-industrial world, filled with fossil fuels, minerals and ores, and empty of people and pollution, those before us brilliantly eliminated much labor using these resources and new techniques. And it fit: the techniques proliferated, the population burgeoned and the inevitable pollution dissipated at first. Techniques were key to this transformation, inspired and rewarded by patents, and by research and development tax write-offs, and quantified by measuring labor productivity. Such a central and celebrated measure was soon referred to simply as ‘productivity’, and expected to grow forever.
So the world filled with people and pollution, while emptying of the easiest-to-access resources. At first, negligible resources were used up in transforming resources into products, yet eventually, coal might be mined from such difficult-to-access seams so rocky that machinery breaks faster than the coal dug can repair it. This exemplifies the energy return on energy invested (EROEI) reaching zero, where net energy returns have dwindled to nothing. At that point it is easier to stay home than to work and burn all the mined coal just to mine, repair and clean up after that very mining. Another way to zero EROEI is through increasingly risky and polluting mining or oil drilling, where cleaning up the inevitable seems unaffordable, and is worse than the resources extracted are good.
In our world today, still filling with willing workers, pollution and problems, while emptying of easy-to-access resources, we can all be better off by increasing resource productivity while sacrificing labor productivity. We can employ many more, pollute much less and conserve our dwindling limiting resources. This can clearly help the worst-off. But what of the majority? It turns out that even the best-off of us can benefit by opportunity broadly increasing, since we are all measurably stressed by the fear of poverty and healthily reassured by greater equality of social opportunity, as documented in The Spirit Level.
Instead of the Robocalypse sparing us lives of drudgery, further elimination of labor worsens our lives, and misses the chance to make the best use of what we have the least of.
But isn’t this Robocalypse inevitable? It may be, but why hurry to meet it? Instead, we can slow the evolution of labor-eliminating techniques by lessening revenue loss via tax write-offs for research and development, and for further extraction of fossil fuels we can’t afford to burn.
Hat tips to Herman Daly, Hazel Henderson, Richard Wilkinson, Kate Pickett and others.
Posted by Brian Cady at 12:40 PM No comments: